One of the best parts of my job is that I get to see a lot of our beautiful state.  I travel about once a week for work – visiting both prospective, new and longtime member properties.  What I’ve come to realize in my short time at OHLA, is that in Ohio, we have a lot of great places to lay our heads.

Many business and leisure travelers alike have stayed at their fair share of chain hotels and some of you might have your favorite brand.  I recently stayed at the Fairfield Inn & Suites Cleveland Beachwood.  The team here took care of 3 staff members as we traveled between the west and east side of Cleveland training hotel staff.  When you’re traveling for work or even just having a quick stop over at a property, it’s nice to have some extra amenities. I went to check out the gym and stumbled across this gorgeous pool!  I wish I had the foresight to bring my bathing suit! Look at those windows – I felt like I was in Florida.  In route to the pool I discovered a unique touch at this particular property.  This property decorated the entire path to the pool with children’s painting supporting the Children’s Miracle Network and Cleveland’s Rainbow Babies & Children’s Hospital – how cool is that?

Since I wasn’t prepared to swim the evening away, my coworker, Cindy and I headed out for dinner.  If you haven’t visited the Orange Place area of Cleveland yet – yowza! It is booming!  Not only is there an entire development (Pinecrest Village) happening around the corner, but there’s a ton of great, local places to eat and shop nearly within walking distance.  We hit ETON Chagrin Boulevard for dinner. This indoor/outdoor mall is packed with high end retail and trendy restaurants. In my last post I mentioned Michael Symon and he found his way into my life 2 weeks in a row.  We snagged a table at B Spot – which has won Best Burgers in America 4 years in a row. We have a B Spot in Columbus, so I knew what I was getting myself into.  I sank my teeth into the Fun Guy Burger and some of their awesome rosemary shoestring fries. The mall area was packed with families out enjoying the beautiful weather, but we were beat after a day of travel and headed back to the hotel.

Sometimes after long days like this, it’s hard to get settled in, but I curled up in bed and dutifully followed this little card lying on my pillow. If you need some recommendations on how to catch some Zzzs while on the road – Arianna Huffington recommends:

I was able to round out my visit to the Fairfield Inn & Suites Cleveland Beachwood by enjoying the great weather the following morning.  Not often do you find yourself at a hotel that has 2 miles of sidewalk to stretch your legs. And on that note, my friends, I leave you with a great place to rest your head in Beachwood, OH. 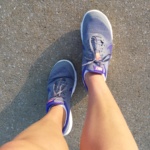 Each year, TJ and I use his birthday as an excuse to travel.  Since we recently returned from our Costa Rican honeymoon, we decided it might be best to keep our mini getaway close to home.  We looked at the calendar and like many of you, we didn’t have any free weekends! It is wedding and baby season, after all. Squeezed on our calendar was a baby shower in Twinsburg, so we decided, what the heck, Cleveland it is.

I wanted to make this birthday trip just as exciting as our trip to NYC a couple of years back – how do I top that in Cleveland?!

I’ll tell you how! We stay at one of the newest, historically renovated masterpieces on E. 9th St. of course – The Kimpton Schofield Hotel. The original, c. 1902 Schofield Building was transformed into a modern, urban oasis and just opened this year. I’m a YP and like everyone says my generation is supposed to, I love the community space they incorporated into the lobby.  Each morning they put out a fabulous selection of teas and coffee and little baby muffins and fruit.  The best part was, I could take it back to my room or enjoy one of these cute reading nooks.  Notice all that green stuff? It’s alive!  The new “it” thing to bring into your lobby are these living walls – perfect, particularly when you’re at an urban property. Their restaurant, Parker’s Downtown, just opened – check it out!

We kicked off the weekend at one of Cleveland’s best restaurants, Michael Symon’s Lola. Lola is located in the East 4th Street entertainment district, just a stone’s throw from The Schofield Hotel. TJ loves pierogis, so you can bet we tried the Beef Cheek Pierogi with mushrooms and horseradish crème fraiche. The waiter said it’s been on the menu since the restaurant opened, which I can certainly believe because it was phenomenal. We wrapped up our first night by visiting another great property in downtown Cleveland – the Azure Rooftop Lounge at the Metropolitan at the 9. The hotel itself is the definition of trendy. Staff looked professional in anything but a uniform (jeans, vests, fedoras, you name it!) and the bartenders were bustling on one of Ohio’s first beautiful summer nights. From this rooftop on the 12th floor, you can see the entire city.

We love breakfast in our family and when we’re traveling, 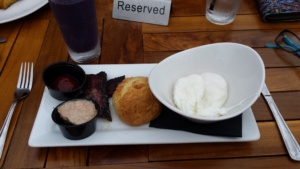 that’s no different!  The following morning, we skipped over to Ohio City (5-minute car ride or 15 minutes on the Red

Line that picks up at 9th & Euclid).  We visited TownHall Ohio City on a recommendation from a local and we fell in love. I had the Flaxberry Smoothie and the Wakey Wakey – that bacon is to. Die. For. We also noticed there were a number of pups on the patio and, was that one of them eating out of a dog bowl?? Yep – this is a very pet friendly joint! Check out their dog menu!

We spent the rest of the day discovering Cleveland. While in Ohio City, we visited Cleveland’s oldest continuously operating, municipally owned market, West Side Market (now open Sundays!). We checked out the new Hilton Downtown Cleveland. Speaking of markets (did I mention we love food?), we also paid a visit to Heinen’s Grocery Store located on the corner of 9th & Euclid.  Heinen’s began as a butcher shop on the east side of Cleveland in 1931 and now operates twenty-two stores throughout Ohio and Indiana.  You can do all of your grocery shopping or visit the historic Rotunda for a grab-and-go selection of fresh salads, sushi, sandwiches, etc. We finished our evening with dinner at another hometown favorite – Pickwick & Frolic, followed by a show at Hilarities 4th Street Theatre, which recently celebrated its 30th birthday!

Before heading home, we swung through Adega, another of the spectacular dining options at Metropolitan at the 9. Settling in with a mug of tea in hand, after a weekend full of discovery, food and sunshine – all in our own backyard, the idea of Inn Love was born.