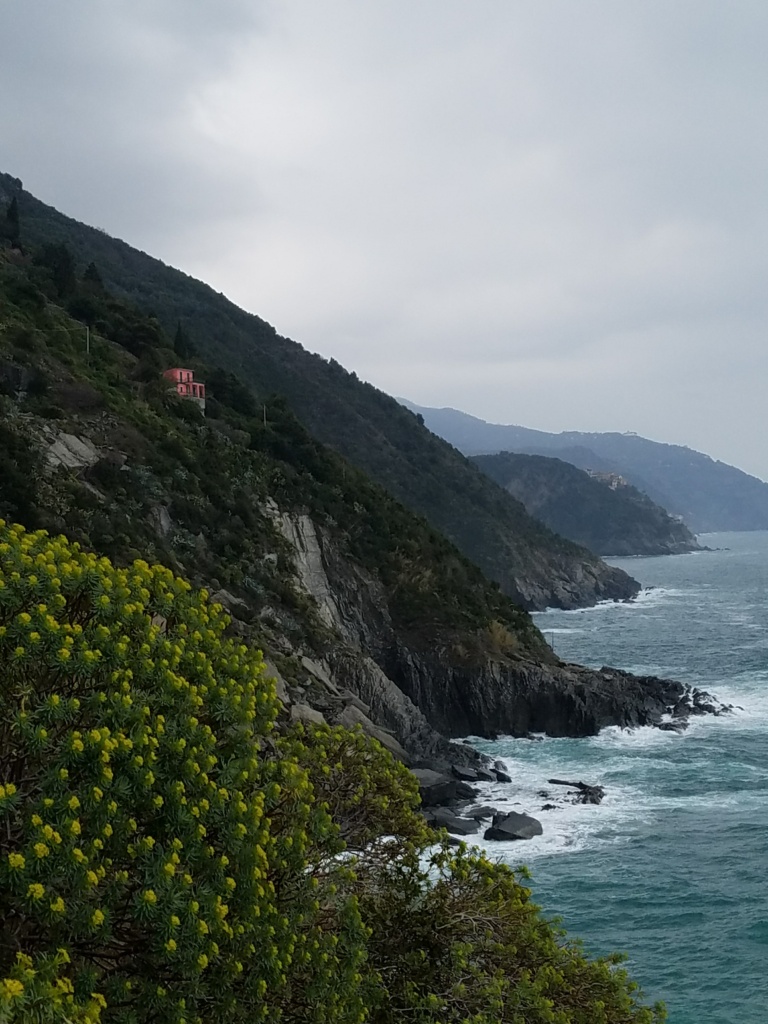 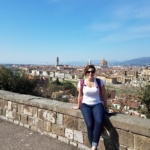 If you aren’t already dreaming of Italy from last week’s post, you will be after today.  After a full 3 days in Venice, we hopped our first train to Vernazza, Italy, with a quick 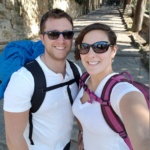 stop over in Florence.  Florence had been on our list of contenders, but we had settled on Venice and the Cinque Terre. Since it’s located conveniently in between, we thought we’d take advantage of the train transfer and grab lunch and stretch our legs. We had a lunch recommendation from a friend, Osteria Santo Spirito, and were not disappointed with some of the best gnocchi we’ve ever had. It was our first “hot” day that we had and lugging 20 pound backpacks around took care of that pasta real fast! We set out to find Piazzale Michaelangelo, where we were assured to find the best view of Florence.  What we didn’t put together was the best view = the most steps…hundreds of them… but we made it, sweating and out of breath to one of the best views of our trip.

We grabbed the next train to one of the highlights of our trip – the Cinque Terre. If you aren’t sure what I’m talking about, it’s probably because what you’re seeing and what you’ve heard are different… Cinque Terre is pronounced (Chink-wa Tair-a). This cliffside string of five towns located on the coast of the Riviera and is one of the most beautiful places I’ve ever seen. Try Googling it – you won’t be able to tear your eyes away.  Before tourists discovered the Cinque Terre, these little villages were connected by walking paths.  Now, all of them allow at least delivery trucks into the town centers, but they’re still just as magical.  We decided to stay in the town of Vernazza which we much preferred over the bustling main tourist stop of Monterosso.  We got off the train in the evening and thought for sure Google Maps could find our inn – it could not. This is when we knew we had found the holy grail of off-road adventures.  We called our host who said he would pick us up.  Good thing because we followed him along winding paths up the hillside to find our little room at Camere Giuliano Basso, tucked away off the main (pedestrian) drag.  Our room was perfect and hand built by Giuliano himself.  After sharing with Giuliano that we were starving he suggested we follow him down to his family’s restaurant where we had one of our other top pasta meals of the trip.  The Cinque Terre is known for its pesto.  Served over handmade pasta with a little cheese – that’s really all a girl needs.

The next day we strapped on our tennis shoes and hiking gear – we followed Rick Steve’s suggested itinerary for tackling the Cinque Terre.  We caught the train to the first 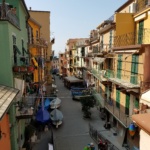 town, Riomaggiore where we learned our first lesson of travel. Don’t count on the accuracy of a travel book over a year old. Intending to catch the picturesque, coastal trail Via dell’Amore (trail of love) between Riomaggiore and the neighboring town of Manarola, we were told by a local shopkeeper it had closed do to landslides.  She pointed us towards an alternate path, warning us it would take almost two hours to traverse (compared to a 25min paved path we were planning for).  But guys, we’re fit, we’re young, and we had bellies full of pasta – so we set off towards the trail. We should have listened. This was a local farmer/winekeeper trail that steeply ran up the side of a mountain and definitely wouldn’t have passed any US safety codes. At its peak, however, we were rewarded with beautiful sweeping

views of the ocean and a steady downhill descent. Seeking a much needed break, we caught the train from Manarola to the third town of Corniglia where we found ourselves a fantastic seafood lunch at A Cantina de Mananan.  The restaurant was quaint and we’re guessing a family owned joint.  It was just what we needed after that hike!  We set off for the next town, our basecamp, Vernazza. We read that 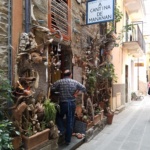 this was one of the best trails and we weren’t disappointed.  Along this path we came across metal tracks running up and down the mountains.  We later learned these are for farmers to transport goods in little boxes up and down the mountainside – genius! Once arriving in Vernazza, we decided to tackle the last town, Monterosso, by train. Monterosso used to be the only place you could stay if visiting the Cinque Terre. A larger town than the others by far, it attracts those with large suitcases and a need for vehicular transport.  Between you and me, we were glad we weren’t staying there! On our final morning, we set off for one final exploration – the Belforte Tower of the ruined Doria castle.  From here, we captured the best picture of the trip. Enjoy!