Last weekend I set out for my day trip to Port Clinton (a story for later) and thought, what better opportunity to visit a member property to break up my long drive? I searched the OHLA database for stops along my route from Columbus and landed on the Victorian Tudor Inn. As a Cincinnati girl, I’ll admit that I sadly have not seen much of Northern Ohio, but now I have many reasons to return! Join me (Halle’s guest blogger Mackenzie) as I tour the Victorian Tudor Inn. 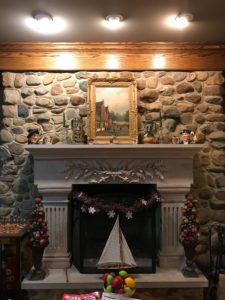 I’ll start with a disclaimer, the picture above was *not* from my trip last week. As soon as I walked in the door, Richard (the Innkeeper) and I agreed we had to use a picture from his website to show the exterior given the dreary, rainy day Ohio so kindly blesses us with weekly from December to April. Anyway…I surprisingly did enjoy my drive through the rain that day. I was able to avoid the highway for the majority of my trip and explore the back roads, which always reminds me of driving home. As soon as I pulled up, I knew I would love this house. Richard told me it was considered the “prettiest in the city” and I couldn’t agree more.

Like any great Innkeeper, Richard welcomed me into his home and invited me to sit in a big comfortable chair in front of his prized limestone fireplace to ask what brought me there, and for a (condensed) version of my life story. As we talked, we realized we had a connection in that my career has mostly been focused around politics, as much of Richard’s life has in some way as well.

This leads me to our first stop in his home, but I have to mention first for those that aren’t familiar, that Richard’s house is filled with amazing antiques. He made a comment that some people may think it looks cluttered, but it felt more like a museum to me. The antiques are carefully placed around his home, and I swear he has a story for every single one. I made the mistake of only planning an hour stop; I could have stayed all day listening to Richard and the fascinating stories behind his collectibles. 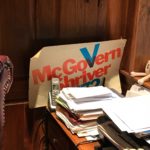 Back to the first stop, Richard’s office. We were still talking politics as Richard pointed to a tattered sign sitting on the back corner of his desk, a McGovern Shriver poster from the 1972 presidential election. Richard told me that he had done some research on the candidates as a young boy (completely on his own by the way) and decided he wanted to go door-to-door for McGovern. His mom eventually agreed, and there we have the start of Richard’s passion for politics! He told me he had taken the sign off a pole after the election was over and has had it ever since, this might have been the most amazing part of that story to me, as I can barely keep track of a pair of sunglasses for more than a year. 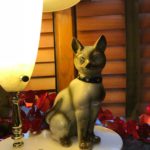 Next, we entered the kitchen, which unlike some B&Bs, is open to his guests, making them feel completely at home. He stocks his fridge with beverages and sets out fresh pastries in the mornings. In addition, Richard provides a hot, made-to-order breakfast for all of his guests. And I have to mention this adorable cat lamp near the breakfast table with gems for eyes (as I blog more, you’ll pick up on my irrational obsession with cats). I’m still trying to devise a way to ask Richard if I might purchase the lamp from him some day 😊

We continued through to the dining room (where John D. Rockefeller once sat negotiating a business deal) and Richard explained more history of the home and its four owners. That’s right, only four in over a century. How cool is that? 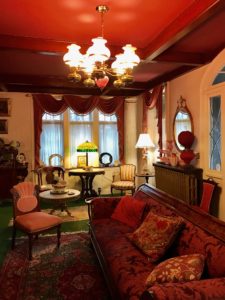 The neighboring formal sitting room is where Richard will often host weddings (and what an elegant wedding it would be). The bright paint reminded me of touring George Washington’s Mount Vernon, where bright paint on the wall during that time meant you had a lot of extra cash. But seriously…how beautiful?

Then we were on to the upstairs to see some of the guest suites, all unique and special in their own right. The first was a nautical themed room, blue of course, a tribute to most of Richard’s life spent living near the sea. The room contained art from across the world, a hand carved bed frame from Bermuda, and a bathroom the size of my bedroom (I later learned that Richard had converted many smaller rooms and closets into bathrooms so guests wouldn’t have to share this space – how considerate!) 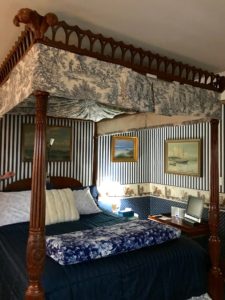 It’s hard to pick a favorite room, but if I were forced, I’d have to pick the room with a bold design and intended for friends traveling together who might not want to share a bed (something I can appreciate). All I could do was stare at that wall when I walked in. There was just something about the contrast between the elegant blush couch and every hunter’s dream wallpaper that I really loved (and may recreate in a future home of mine).

We skipped another suite on the top floor, as it was occupied by guests, and headed downstairs via the secret back stairwell for the conclusion of my tour. As I was rushing out the door for my next appointment, Richard pointed out one last antique hanging on the wall, mourning jewelry. This tiny wreath made from hand-blown glass was a Victorian-era tradition of creating jewelry that contained pieces of your loved ones who had passed (think bones and hair). Creepy…but endearing? 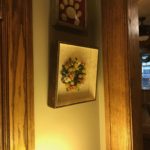 If you’re ever passing through Northern Ohio or making your way up to Cedar Point this summer, be sure you stop at The Victorian Tudor Inn, I know I will definitely be back. Thanks for everything, Richard!