I’ve had some people comment recently that it looks like I travel a lot for work, you’ve got that right! But, I also travel A LOT in my personal life. It’s a good thing I love travel, wouldn’t you say?  The month of September was grueling for the hubby and me – between the two of us, we slept in 6 different hotels in 4 different states (South Carolina, Ohio – but not at home!, Nevada and Tennessee) in 5 days. That can get exhausting. Luckily, the end of our month of travel chaos ended in the most perfect way.  Our last stop was a wedding in the Great Smoky Mountains of Tennessee.  Backtracking a bit, the bride’s brother was married in Telluride, CO 2 years prior. We FELL IN LOVE with Telluride in the fall. My heart aches thinking about it and when I will get the chance to return.  Good news, this wedding was just as beautiful. 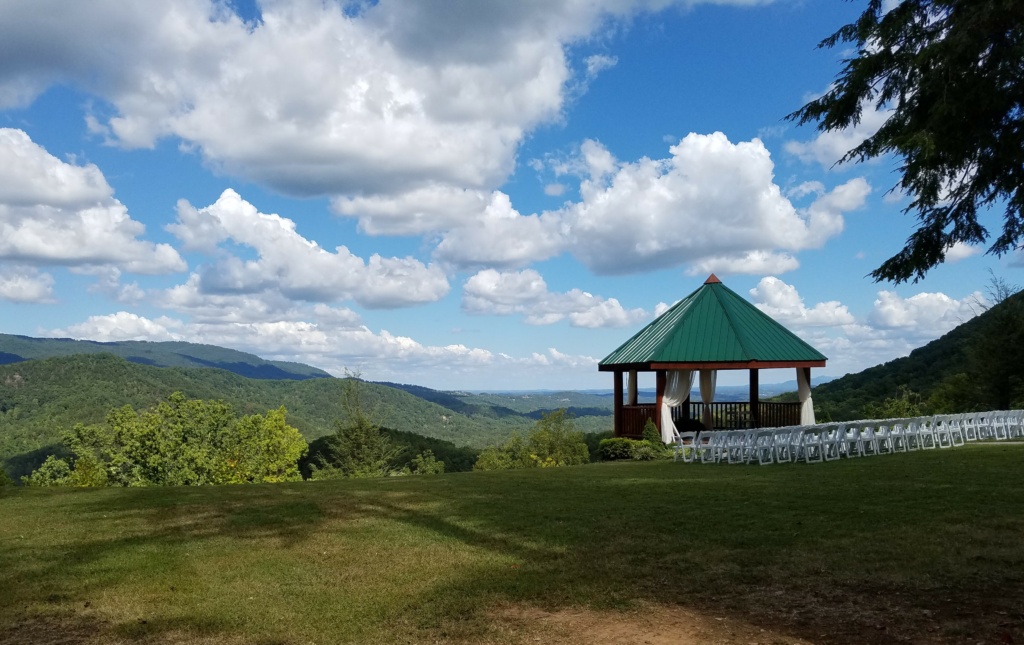 We drove. I’m not always a huge fan, but flying wasn’t going to be much more efficient.  We arrived late in the evening and battled a dark winding rode up the mountain side.  We were far later than we had hoped, missing the community dinner for guests not attending the rehearsal dinner. Luckily, my mom and dad were there and scavenged some food.  See, the original plan was for us to meet for dinner in Sevierville.  That plan was quickly tossed aside when my parents arrived. My mom called exclaiming, “we are not going back down that hill at night!” We laughed, because, it was night and we had to take the road she was referring to! As we entered the Brother’s Cove property, we were amazed at the size of these 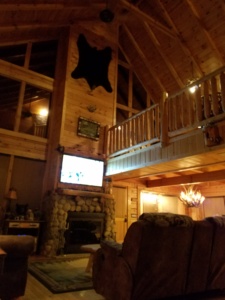 cliff hanging cabins.  They are MASSIVE and all supported on stilts.  From the outside, I could tell these were not your typical “ruffing it” experience.  We definitely didn’t need to question if there were going to be linens provided at this cabin experience. We popped out of the car and walked into the most immaculate “living room” I’ve ever seen 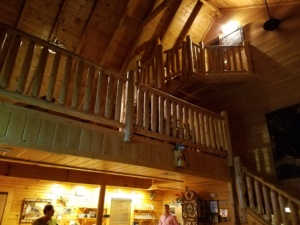 – cabin or not. This cabin sleeps six, but apparently you can squeeze ten.  It is three stories! My mom says they gave us the more secluded room on the third floor, I assume what she meant was, we gave you the third floor room because you two have the best knees in the group.  That’s fair, we were sharing the room with my parents and a mother/daughter duo from my hometown.  The mother is probably 70 or 80, so I didn’t complain.  We climbed that spiral staircase and found the most beautiful “tree house” room.  We didn’t have a whirlpool like the others, but wow, did we had a view! It was hard to see at night, but when you woke up, you could see for miles.  The rooms were built with three walls of floor to ceiling glass. It was so beautiful. Each room also came with its own private porch.  We were there with family, so I wanted to join my parents for a hot tea in the morning, but if I were there with a bunch of friends – it would be a nice way to peacefully start the morning in privacy. 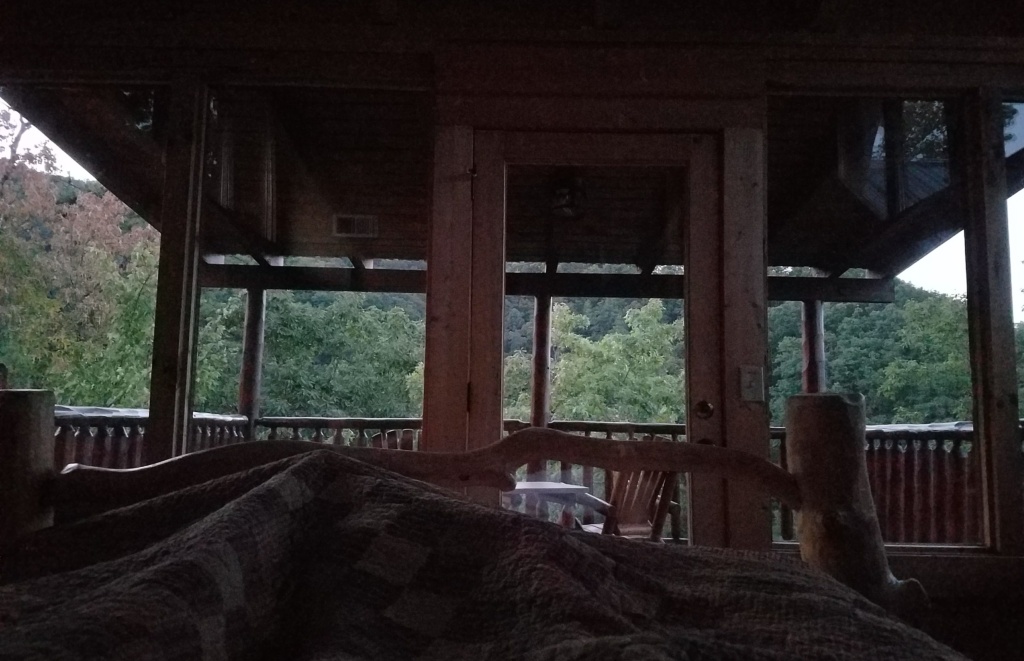 Wake up to this view @ Brother’s Cove – Pigeon Forge, TN

We only had a day to spend at Pigeon Forge so we wanted to make the most of it. The cabin had a full kitchen, much nicer than my own, so had we planned accordingly, we could have easily cooked breakfast for an army.  We set out to find a local place that cooked up some good Southern breakfast fair and we found it at Grandmother’s Kitchen. The sign outside advertised “Cathead Biscuits” which piqued my interest.  What the hell is a Cathead Biscuit? I was willing to find out. Turns out, “cathead” refers to the size of the biscuits.  They were colossal and delicious. If I wasn’t always concerned about not looking like I eat as much as I do, I would have eaten more than one of those!

My dad was acting as our guide.  We set off to find the Laurel Falls Trail.  Apparently one I’ve walked before as a kid, but I didn’t remember it.  You probably could have guessed, but cell phone reception is sub par in this area. Had I needed to find this place on my own, we’d probably still be looking. Luckily, I think my dad has a detailed world map inside of his head – he can always find everything. The trail was great – fairly easy for the hiking newbie, but had some elevations for sure.  The falls were lovely, although there were a lot of people there.  Sadly, I think a bus of tourists had been dropped off prior to our arrival, because they were traveling in pac…herds. My mom doesn’t make too many appearances here, so here 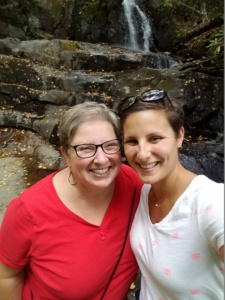 you go! We made it back just in time to make a pitstop for some lunch food and to hit the pool.  If you’ve ever spent time driving down the main drag in Pigeon Forge,you might have thought for just a second! that you were in the over commercialized area of Myrtle Beach, if it weren’t for the mountains. YIKES!  It was too much for me.  Luckily, we came across a great Tennessee BBQ join that had a big smoker out front and someone was actually using it!  Boss Hogg’s BBQ was amazing.  TJ and the ‘rents got ribs and I chose the brisket.  Everything was perfect. We headed over to the pool to catch the last of the Tennessee rays before preparing for the wedding.  Honestly, I have no idea why more people weren’t at the pool. OK, it was a little chilly. I don’t believe it’s heated and by September, the nights are just too cool, but again, that view!  I could have sat there all day, but we had a wedding to get to!

In researching Brother’s Cove, I knew that weddings were the money maker for them and now I can see why. The backdrop for the ceremony was jaw dropping and the 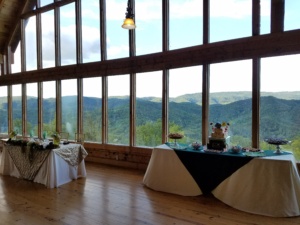 reception was top notch.  They turned out delicious food, but even if the food was awful, you wouldn’t haven’t noticed if you just stared out the windows.

Kudos to the staff and the property at Brother’s Cove.  Our visit was far more than we expected and I’m pretty sure the bride and groom were quite pleased.

We cannot wait for another opportunity to escape to Pigeon Forge and we know exactly where we will stay.  With a hottub, grill, and full kitchen all wrapped up in a luxury cabin atop a mountain with a spectacular view, how could you not come back?

Thank you for kicking our fall off with a bang.  The Smokies are truly Great!