What if I told you that my husband and I stayed in a city jail for two nights? Would you believe me? Well, you better, because that is precisely where we stayed (kinda… ok, it is a hotel now, but it was a jail!) during a recent trip to Boston, Massachusetts. We were recommended to this property from friends who lived in Boston for several years. Our friends talked about its architecture, history and ambiance and they certainly did not let us down. 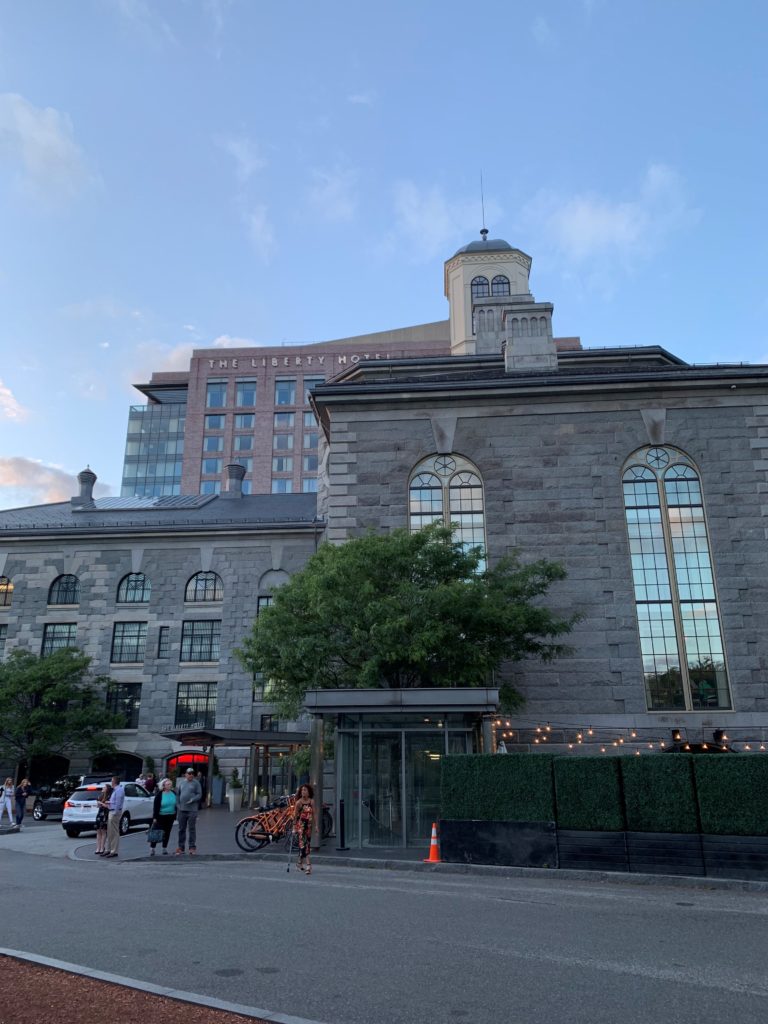 Allow me to introduce you to The Liberty Hotel, a part of the Luxury Collection under the Marriott umbrella. The property has a storied past of which they have built into a brand. The Charles Street Jail was built in 1851 and housed some of Boston’s most notorious criminals for 120 years until it was shutdown as it was declared to be unfit for the prisoners. 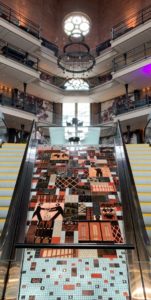 The central atrium, original jail cells and granite contributes to the hotel’s story. When we arrived, I was floored by the exterior with its beautiful stone, the build and the gorgeous windows. When we walked in and up the escalators, bright sunlight filled the 90-foot atrium. We later noticed that the circular designed window within the atrium is a major part of their logo which is an old skeleton key with the same window design at its handle.

I loved the clever references within the names of their food & beverage outlets.

Alibi (my favorite) – have a seat in an original cell and enjoy a custom cocktail and a late night snack. What I loved most were the celebrity headshots that decorated the brick walls. 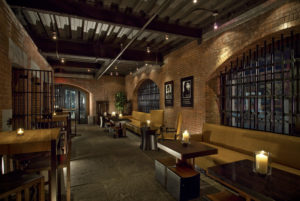 Liberty Bar- an exciting twist on your “lobby bar” as the lobby turns into an energetic, fun, social atmosphere by night. 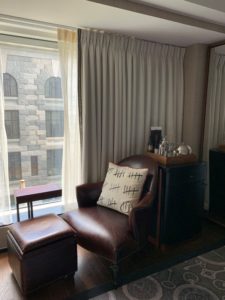 The details did not stop in the lobby. Our room had so many unique qualities. The carpeting had a pattern with skeleton keys & time pieces, a pillow with tally marks sat atop a leather chair, one of our & nightstands was a safe. The bathroom was spacious with a soaking tub, complete with fluffy logo’d robes.

The Liberty is an experience from the moment you walk in. If you decide to make a trip to Boston, at minimum make this a stop for your night cap. 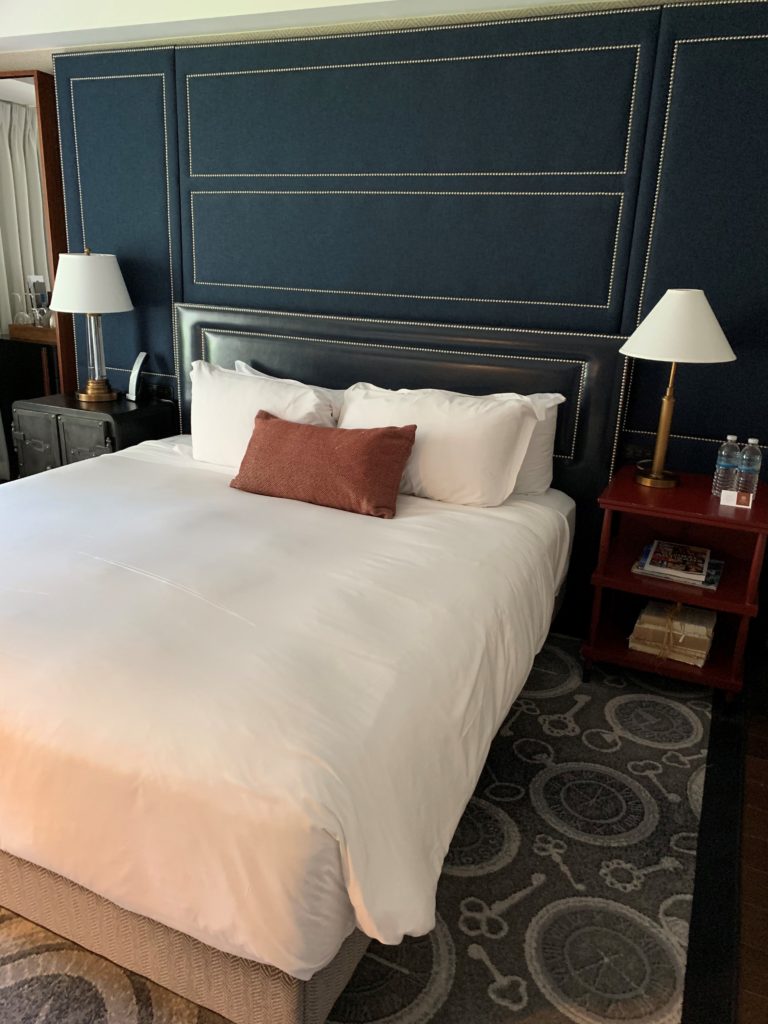 To mark the milestone of my very first business trip, I’m sharing my recent experience down in the very toasty, vibrant city of Atlanta, where I had the privilege of spending two nights at The Whitley, formerly known as the Ritz Carlton Buckhead. 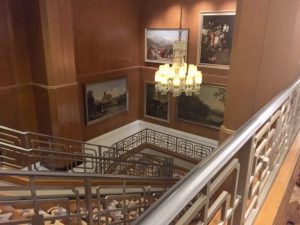 The Whitley, located in the upscale Buckhead neighborhood north of downtown, is the setting for a series of conferences my company is hosting throughout the summer. As I work in communications, I had the privilege of attending our Marketing & Communication Meeting, which was held there earlier this month.

I recall our meetings departments being surprised when we were told late last year that the hotel they booked would soon no longer be the Ritz Carlton as it had been for three decades. Instead, it would be rebranded as The Whitley, A Luxury Collection Hotel by Marriott/Starwood. Just short of a year later and there I was, getting to see the result.

Before reaching the hotel, I took a very efficient trip on the MARTA train from the airport, followed by a very sweaty walk from the station to The Whitley. I once read that Charlie Daniels’ “The Devil Went Down to Georgia” is a tribute to southern pride and a reference to the devil coming from the The Union (hence why he came “down”), but I’m pretty sure it’s just because Georgia is so, so hot. 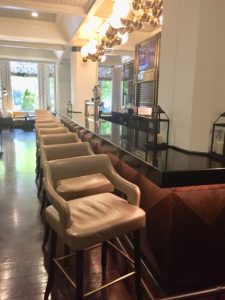 After reading a few blurbs here and there from different Atlanta media outlets, I learned that the changes to the property came from the industry moving away from the very formal style that used to be so popular in hotels and into a more contemporary, casual future. From what I’ve heard, it has long been the place for celebrity parties and very sophisticated activities like an Afternoon Tea. The landmark Ritz Carlton property went through some big renovations to align with the Luxury Collection brand, and is now billed as “luxury with chic Southern style.”

The hotel sits on Peachtree Road, which if you can believe, is one of 55 “Peachtree” streets in the state of Georgia, and faces the famed Lenox Square, a very posh mall that is referred to fairly frequently in rap songs (sidenote: I did NOT see T.I.  or Andre 3000 while visiting).

I walked into The Whitley lobby and felt a little bit like I was on the Titanic. I know, that sounds overly dramatic. But I was there for business, so I was picturing brightly lit, sleek furniture, I-need-to-hop-on-this-call aesthetics. This lobby, with its elaborate, purple-accented chandelier, dark wood finishes, ornately-framed artwork and beautiful sit-like-a-lady armchairs, made me think of a more formal, elegant time. In my ripe old age of 26, I prefer it this way. You don’t see that so much anymore, so to me, it’s cool. 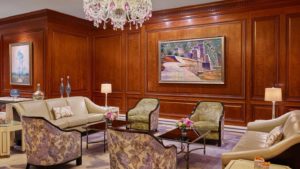 I never saw the property as a Ritz, but in my exploration through its halls I felt like they did an excellent job mixing that elegant “formal” charm with contemporary, more casual touches that leisure and business travelers alike have come to expect. Its website claims that it now boasts cosmopolitan style as well as timeless elegance, so I think I’m on the right track.

The lobby, with its various candy jars and its own coffee shop, all of which I had to resist breaking my sugar diet for, melts into a lounge area that wonderfully mixes more eclectic artwork with cozy couches (blankets included!) and a bright, colorful bar.

Around each corner were tall, luxurious-looking armchairs that I always expected to find someone hiding behind. Shout out to my coworker, Maggie, for taking a picture of me on one of those sophisticated lavender sofas. 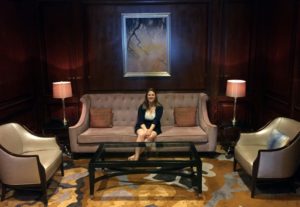 I also had the privilege of somehow getting a room on the very top, 22nd floor, where I got a cool view of Buckhead with downtown in the background.

I will admit I was a tiny bit intimidated being down there at first. It was my first business trip, and despite having been to a handful of foreign countries, it was only the second time I’ve ever flown without my family (mild flight anxiety over here!). However, between the views, a clean room, a cozy bathrobe, the elegant décor and the friendly vibes, I felt as at-home as one could feel when plucked out of Ohio and placed in the middle of the deep South. So for that, I extend a warm, northern “Thank you!” to The Whitley for having me!