I know, there’s been a lot of hip-hopping around.  But, I grew up traveling and there is no stopping me! One of my all time favorite places to visit is the beautiful Blue Ridge Parkway. We have stopped a number of times in the town of Roanoke, Virginia to enjoy its culture and of course, food!  More times than I can count, I have stayed at The Hotel Roanoke.  There have been some changes though, and I’d say, for the better.  The Hotel Roanoke was built in 1882 by the Norfolk and Western Railroad with an astounding…. 34 rooms. Over the past 134 years, it has continued to serve travelers while expanding and changing.  When I first got to know The Hotel Roanoke, I was young and really only cared about their awesome pool in the hot July sun.  At the time it was an independent property. Then, it became part of the Hilton family, where it has stayed for the past 20 years.  I started to remember it as “the place with the cookies!” because after all, it was a DoubleTree by Hilton.  But, I had the chance to revisit The Hotel Roanoke this year and was so happy to see it had (almost) returned to its independent charm.

The Hotel Roanoke remains a part of the Hilton family, but has adopted its Curio brand. Curio is Hilton’s version of what we visited a few posts ago in Wytheville, VA (The Bolling Wilson Hotel, an Ascend Collection hotel) – an “independent brand.”  In fact, Hilton describes its Curio brand as, “a collection of independent, remarkable hotels whose only unifying characteristic is their glorious individuality.” I think this is a great way for the Hotel Roanoke to mix the standards its guests have come to know through Hilton with its historic individuality. In Ohio, Curio is new to us.  We have a few of them on the horizon in Columbus and around the state, so let’s take a look at what makes Curio…Curio!

When you pull up to The Hotel Roanoke, you won’t know it’s a Hilton.  In fact, you’ll never know (unless you read my blog!).  You’re greeted by a spectacular Tutor Revival building housing nearly 400 rooms, 2

restaurants and a conference center. The valet is something out of a movie, with sweeping staircases, bronze railings and flowers EVERYWHERE. The lobby is just as mesmerizing – with an open floor plan

and comfy places to sit and soak it all in.  I loved the added touch for the weary traveler – a table of fruits, snacks and other goodies.  This is such a simple addition, but it meant a lot to me after wrapping up a 7-hour car ride.

We hurried through check-in so we could maximize the evening sunlight poolside.  The pool at The Hotel Roanoke is perfection.  There is a poolside bartender, offering up classic cocktails and fun Southern creations. After a few hours enjoying the pool and hot tub, we were ready for dinner.

The Hotel Roanoke is separate from downtown Roanoke by a number of train tracks.  The city built this super cool skywalk to connect the two areas, making downtown Roanoke easily accessible by foot. The skywalk is full of fun, interesting facts and history about the city. As I mentioned, we have visited Roanoke a number of times before and the dining scene there is excellent.  There are so many good places to choose from!  Our dinner reservations were a bit later, so we decided to find a nice place for an adult beverage.  We stumbled across a place called Fortunato.  It was hip, fun and bustling.  What I

enjoyed most about Fortunato was the mixologists (I’m going to say this, because they didn’t look like your typical bartenders!) were whipping up amazing, clever drinks.  I stole a copy of the creative drink menu the waitress had drawn herself.  To me, it screamed coloring page and I can’t wait to put a colored pencil to paper. I tried The Estate which was to-die-for. Eventually, we wrapped up there and ventured down the street to dinner.  If you haven’t been to Roanoke, you might not guess that in the evenings there is free entertainment everywhere. This town is literally jamming in every corner of town.  Just walking between streets, we heard live music pumping out of open door after open door.  But we had a dinner reservation to get to and you know where my priorities lie!

So we made it to our restaurant. My mom can take full credit for finding this gem – Lucky. Located in the heart of downtown, this little place was definitely a hot spot. We had reservations, but the owner was sitting in as host and let himself get a little backed up and for good reason.  This restaurant was bringing in people from all walks of life. I wouldn’t say this was a hipster hangout or a businessman’s restaurant – they were there to serve everyone Great. Food.  We only waited a short bit and he had us seated quickly.  We looked at the menu and I felt conflicted.  What do you do when you want everything on the menu?  Luckily, in the Runion (maiden name!) family, we were raised on ‘don’t duplicate orders at the table.’ We are the sharing sort, passing forks, harmonious “Mmm!”s and comparing notes.  Luckily, we did all agree on one thing – we needed that Bread Plate!  Packed with goat cheese and olive tapenade. So that’s how our food journey started.

Don’t worry, I didn’t completely embarrass myself, I did choose something from the menu.  It really wasn’t hard when my eyes finally made it to the last item on the list – Mushrooms and Gnocchi. Because, see, this girl has 2 weaknesses in life: 1) dessert 2) gnocchi. It was amazing.  It was a perfect blend of the richness of homemade gnocchi with the earth taste of mushrooms.  I was in foodie heaven. If I remember correctly, TJ and my sister ordered the Rib Eye, my dad the Buttermilk Fried Chicken and my mom, the Leaping Water’s Pork Shoulder.  Everything was perfect. I can’t remember the owner’s name who greeted us that evening, but thank you! for one of the best dining experiences I’ve had on the road. I think we were truly…Lucky!

We made it back to the hotel, just in time to lay weary heads and full bellies to rest, but not before deciding on how and when to tackle breakfast in the morning!  Dad and I are the early birds of the group so we agreed to find a good spot before the others woke.

So by now, you know when I travel I eat like a king and then run it off in the morning.  I do love to discover a new area on foot – it’s really the only way to do it!  I laced up my shoes and set out to run to the Roanoke River. Luckily, the City of Roanoke has a ton of great Greenway Trails you can follow. I set out in the early morning sun and headed through downtown to the trail – who do you think I spotted on the way? My dad, walking looking for “good coffee.” (Not to suggest the hotel doesn’t have great coffee, this is just my dad’s ‘thing’)  We were able to scout out a few breakfast places including one place that’s been around since 1930 and advertises $.75 coffee & $1.40 hamburgers – The Texas Tavern – Roanoke’s Millionaires Club!  We settled on Scrambled which served up all kinds of scrambled egg combinations.  We were able to snag a seat outside and enjoyed a delightful breakfast before heading home.

My favorites parts of downtown Roanoke were the little things that 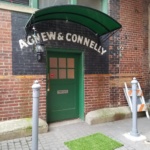 you don’t always catch the first time around. The hidden door in an alley (cool speakeasy?), the bridges switching back and forth over the railroad tracks, or the chicken mosaic on the sidewalk.  Each time we come back, there is always something new to discover. But sometimes, when there is an everchanging landscape, it’s nice to have an old standby that you know will be there year after year in all of its grandeur.  I will always look forward to returning to The Hotel Roanoke & Conference Center and hope you’ll try it too!