2016 was a great year. Personally, it was pretty cool because I got to marry my favorite boy; my little sister moved to Columbus and we had an inaugural Christmas party in our new home. Oh yea, and I started this blog!  In the world of travel, I got to do some pretty cool things this year and it’s been a great experience sharing it with you. I thought it would be wise to sum up 2016 in the event you missed some of the highlights – it’ll be a photo-heavy recap, some food is involved (duh!).  Enjoy!

I wouldn’t even want to suggest that the first quarter of 2016 was boring for me. I was trying to remember what I was preparing for a year ago today and had to consult the calendar. The multitude of colors on my calendar was kind of frightening.  No wonder I couldn’t remember what I was doing… all of which was overshadowed by the planning of our wedding. For those of you that don’t remember, I’m a meeting planner as well, so I was devoting lots of energy to throwing the PERFECT party come April. Unbeknownst to me, I must have been saving up my travel energy for what was to come…

I visited Kalahari for the first time ever (!) and also the first of three times in 2016. In March I was attending the Meeting Professionals International Mid America Conference (MAC).  I learned a lot and met some great new friends. I was also recognized for receiving my Certified Meeting Professional (CMP) Certification, which is pretty cool!

Also in March, I got to see two brand new hotels – one open and one not quite open!  I was able to visit the new Kimpton Schofield Hotel, just after opening. We returned to stay overnight in May, when the idea for the blog came to fruition!  I was fortunate enough to get a hard hat tour of the new Hilton Cleveland Downtown. It was SO COOL. If you haven’t been there yet (it’s open now!) please go check it out. Whether you’re there to see the living wall in the lobby, the lake views from the rooftop bar or to eat at one of their awesome restaurants, it’s worth the trip.

I can’t help but first point out – I got married!  This was by far the coolest thing that happened in 2016.  But, before all of those shenanigans, I had a Bachelorette Party.  Don’t worry folks, this blog is pretty PG.  I’m not your typical Bachelorette Party Go-er. I’m super lame. Really, all I wanted were my best friends in one place that had sunshine. After all, I didn’t want to be the same color as my wedding gown (Boo!). My girlfriends and I got to stay at the BRAND NEW Residence Inn Miami Beach South Beach. The hotel has just opened and it was super flashy. It wasn’t anything like what you’d see in Ohio, but then again, is anything in South Beach like Ohio?

Following our wedding, we visited Punta Islita, Costa Rica. We chose to stay at the Hotel Punta Islita which is an Autograph Collection property frequented by the rich and famous.  We didn’t get to meet any celebrities, but we had an awesome time. When I’m on vacation like this one, my routine is pretty simple – wake up, do a non-traditional workout (hike a mountain, swim in the ocean, beach side yoga…), eat breakfast, sit by the pool and read, eat lunch, sit by the pool and read, eat dinner – repeat. This is the view from my book.

What happened in May is pretty spectacular. TJ and I were sitting in Adega after a long holiday weekend.  I’m sipping my tea, TJ his coffee. We’re playing one of our favorite post-trip games, “What was your favorite part?” when it happens. It was TJ’s idea. I can take no credit.  InnLove was born.

One of the coolest things in June was the ability to share one of my favorite things with other people.  Maybe you haven’t picked up on this yet but I work in the hospitality industry. One thing I know you have picked up on is that I love to eat. Any chance I have to put those two things together for work – IRRESISTIBLE! In June, I was able to host a hospitality reception of sorts at one of our favorite places in Columbus – Wolf’s Ridge Brewing. TJ goes for the beer, I go for the brunch – Toad in a Hole is hands down the BEST BRUNCH food I have ever had. Sadly, I didn’t get to share brunch with my guests, but we did get to break in the brand new WRB Taproom. If you haven’t been there yet, go. I’d start with brunch.

Oh July, how I miss you. That might seem crazy, but more crazy is that I divide my year up into two major events – Christmas and July (not to be confused with Christmas IN July).  We go on our family vacation every July to Ocean Isle Beach. It’s the best. It is so easy and we just sit around in the sun for a solid week.  This year was particularly cool because we actually discovered something new! Guys, when you go the same place nearly 30 years in a row, it’s hard to break the mold, but this year it happened. My parents found this super cool hotel that I guarantee will become part of the annual experience because our time there was that great.  Tucked in the little town of Wytheville, VA along I-77 is the Bolling Wilson Hotel (and, also important…their restaurant, Graze on Main). What a fabulous find. If you want to read more about it, let me direct you here…Ascending to New Heights in Wytheville, VA.

Summer was super busy for me both personally and professionally. I had the awesome opportunity to round out a fabulous summer travel season with my first trip to Gervasi Vineyard. Gervasi is located near my hometown, so the chances that I’m in that area and not just staying with mom and dad are slim. I am SO GLAD I went! The Villas at Gervasi are super romantic and luxurious.  I had a fire by my bed (I totally turned it on at bedtime even though it was easily 80 degrees out.), refreshments in the common area and a beautiful patio overlooking the pond. The dinner served at The Bistro was top notch and the atmosphere was that of the valleys of Sonoma or Napa, not Canton, OH.  If you haven’t had a chance to lose yourself at Gervasi – do it, before everyone finds out!

Not to be outdone by Summer, Fall came swirling in in grand fashion. Remember that post about sleeping in 5 different hotels in 10 days or something absurd like that? That was in the month of September. So here, I feel like I really need to narrow down the best of September, but truthfully it’s easy and in the light of the most recent events, I think it’s important to highlight the beauty of Gatlinburg, TN. We were called to Sevierville, TN for a wedding the last weekend in September. It was the final stop on a month long travel rodeo and we were beat. I couldn’t have been more relieved when I discovered where we would be spending a long weekend, celebrating the marriage of one of my childhood friends.  The setting was majestic and the cabin we stayed in was super cool. We had a lofted bed in a room with floor-to-ceiling glass on three walls that made you feel as though you were quite literally sleeping in the trees. I cannot wait for the opportunity to go back, because Gatlinburg and the surrounding communities will come out of this year’s tragedy with a stronger and even more impressive travel experience to share with the world, mark my words!

So, October was a super crazy month for work and I didn’t get to travel very much. I did, however, discover a lot of cool new places in my own backyard while working hard to put on a big travel industry conference with the rest of the OHLA crew. Some of the hotspots we discovered are:

Drinks out: Pins Mechnical – Columbus, OH TJ threw the ball so hard he broke the lane we were on.  #ProBowlerProbs

Entertainment: Columbus Blue Jackets How have I never been to a hockey game?! SO. FUN.

November was cool because we got to do some fun things for TJ. In all honesty, my calendar dictates a lot of our schedule. He is a good sport for going along with everything I try to cram into our lives. Each year, my West Virginian plans a trip to Morgantown, WV to visit with his friends.  We all know by now I love traditions and one of my favorite fall traditions is the drive along the West Virginian “ridges” (those are the winding roads of the mountains for us Ohio folk) to Morgantown. I haven’t had a chance yet to cover this expedition in the blog, but I want to share a quick snip of this particular trip because it was so fun. We had our first snow of the season on a frigid night in Milan Puskar Stadium. I actually had one of our property members tell me that she has always wanted to experience a football game at Mountaineer stadium.  I’ve gotta tell you, kids, the emotion wrapped up in 60,000 fans singing Country Roads at one time is something else…even for a Bearcat. This photo does depict how similar WV weather is to Ohio… one day it’s sunny and warm, the next day it’s snowing and frigid. Here’s to seasons!

December. Much like July, it has really been a highlight of our year. We were able to take a trip to Napa that was unreal.  You haven’t read about it yet, as it will be the opening piece for 2017. But, I do like to share gifts this time of year, so here is a little snip it to tie you over until then. Isn’t it beautiful? 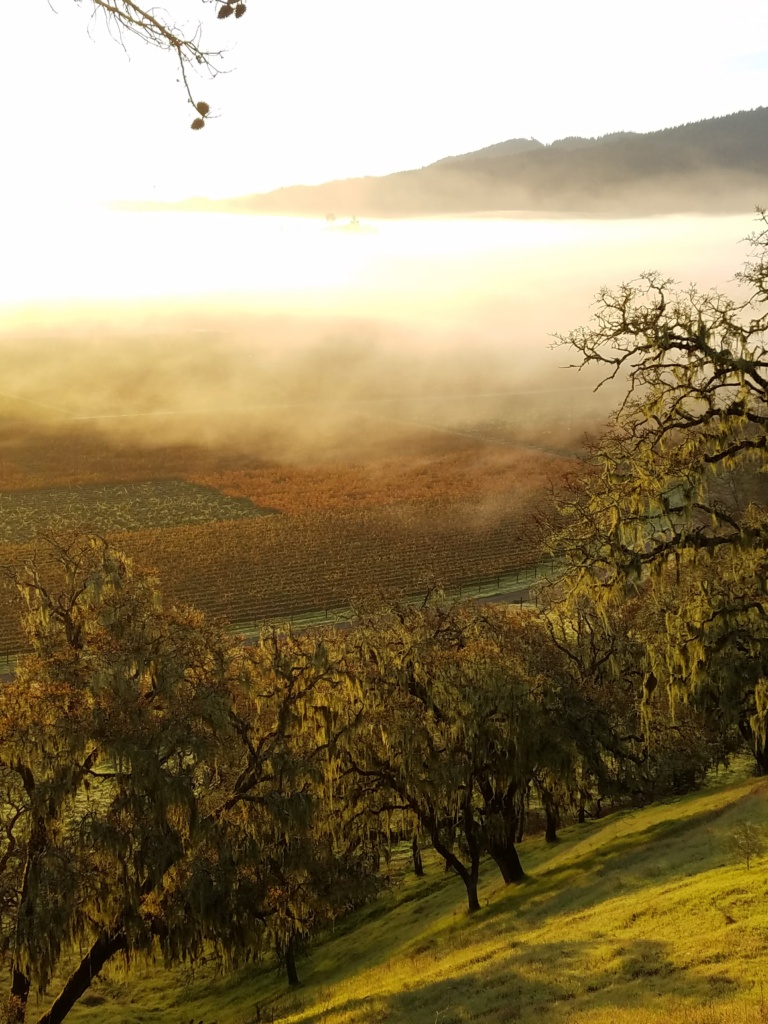 I will not be posting again until January 6. See you next year!

One thought on “That’s a Wrap!”