Ever wonder what all of the cool kids are doing? Just stick with me, I’ve got the inside scoop!  10 years ago, the “cool” thing was to be a cookie.  You’d describe a house in the suburbs as “cookie cutter”.  You build one hotel and you copy and paste it into a zillion different locations so that a guest couldn’t tell if they were in Fort Lauderdale or Boise; because the Marriott felt like the Marriott and the Holiday Inn felt like the Holiday Inn.  The same went for restaurants. People would stick with what they knew, a taste of home.  Some security.  Fast forward to now and that has all gone by the wayside.  There is something to be said about ensuring you can receive the same type of service at a brand you’ve come to know and love, but what if you could hold on to that aspect, but truly experience a new place? GENIUS!

Over the past few weeks, I’ve been reporting on the new Marriott overhaul.  I recently showed you the complete renovations of two full service Marriott hotels – Cincinnati Marriott North (West Chester, OH) and Marriott University of Dayton. Did you know there are 10 Marriotts in Ohio alone? Can you imagine traveling among them and never feeling like you get to experience something new? I can’t.  I’m glad to see this trend towards diversity and uniqueness.  So, is the 3rd time a charm?  Let’s see what the “new” Columbus Marriott NW is all about! 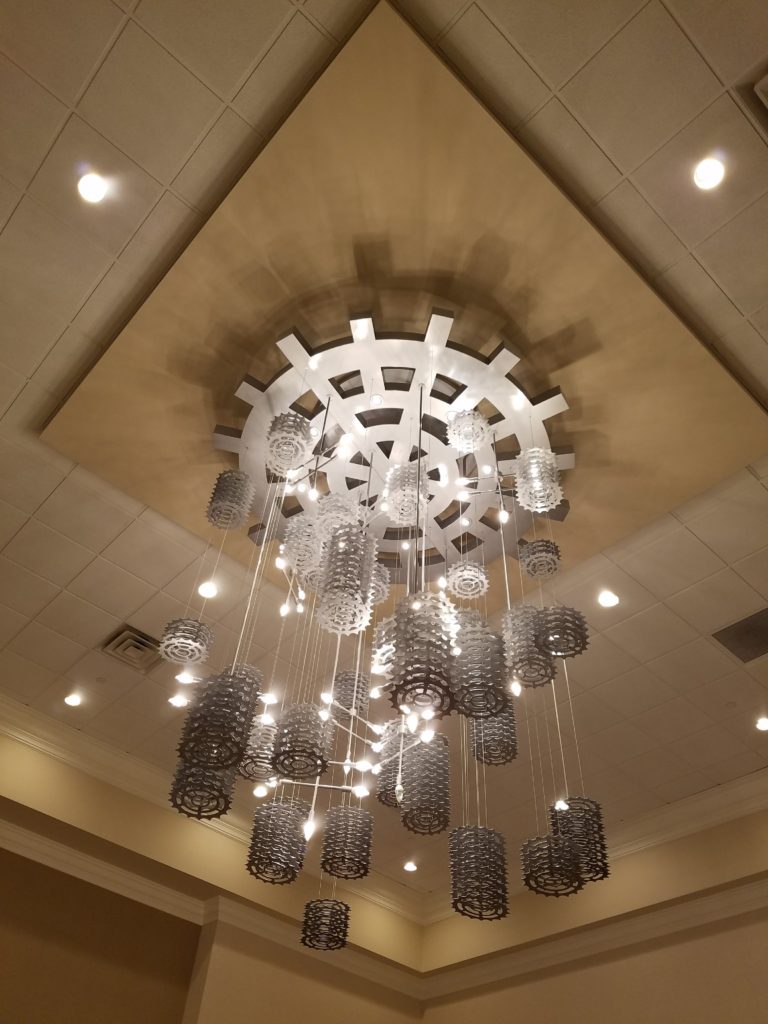 One of the most obvious signs of change hits you the second you enter the lobby.  Each of the three Marriott lobbies I’ve visited over the past few months have been different, but of those part of Pyramid Hotel Group, PHG for short, (like the Cincinnati Marriott North), the new focal point is this custom, one of a kind chandelier. Click back to my stop in Cincinnati, completely different! And these aren’t just any chandeliers, they’re massive and definitely give the lobby that wow factor.

We set off to explore the new public space.  When the PHG Marriotts were first built, the structures themselves were, and still are, nearly identical.  It takes a lot of work during a renovation to actually make these spaces feel unique.

The open floor plan of the public space, a staple of the PHG Marriott, is hard to ignore. 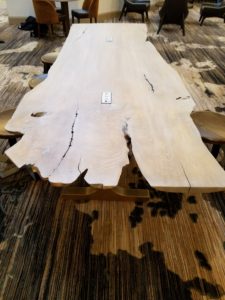 At the Dublin property, they’ve filled the space with massive lamps, floating walls and super cool furniture.  Check out the new communal table, a raw-looking piece of wood fitted with outlets for laptops.

You might also be distracted by the carpet, I was.  It’s a little hard to see in this picture, but I swear it looks like a map.  I don’t think that was the intention (I’ve actually seen carpet like that before, in the dual Hampton/Homewood Cincinnati Downtown), but I could have sworn I was looking at little maps of Ireland…I think it was a clever mirage!

Another staple of the full-service Marriott is the Starbucks counter. 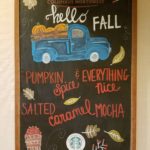 You can get just about everything you would at a Starbucks, but with a little local inspiration.  I couldn’t help but snap a picture of one of the employee’s artwork! 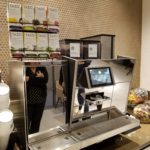 Next, we made our way into the new M Club.  You might remember me mentioning that the old “concierge lounge” concept has also gone by the wayside and has been replaced with a more desired hangout space for loyal guests.  Marriott’s M Club definitely creates some FOMO.  It is now situated immediately beside the lobby, has wine on tap and this fancy Starbucks machine… but you can’t get in without the right key card.  Imagine sitting in the lobby and seeing all of the cool kids swiping into “the club”?  That’s how you create more loyal guests. Smart move, Marriott. 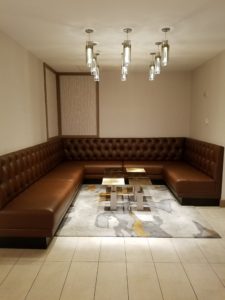 Another travel trend is to ditch the chain restaurants in favor of independent food options with local fare.  Luckily, this concept wasn’t lost during the renovations either. 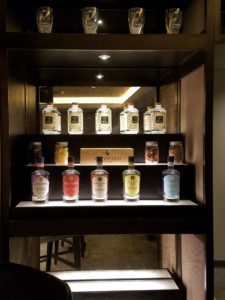 The Columbus Marriott NW got rid of the standard Marriott restaurant concept and re-branded its restaurant, Two Brother Bar & Kitchen.  Of course, like you’re wondering, I had to ask – Two Brothers? I guess for the two years I lived in Dublin, I wasn’t a very good resident.  It should have been obvious! Some of Dublin’s first settlers were two brothers – Peter & Benjamin Sells. The surveyor of the Sells’ family land said it reminded him of his home in Dublin, Ireland and Dublin, OH it became. The new restaurant serves breakfast, lunch and dinner with a great menu.  Might I recommend the Gerber Farms (from my hometown!) Cobb Salad, the Guacamame or the Crispy Pork Belly Brussels Sprouts? The restaurant also serves Guinness on tap (duh!) and has a great selection of locally produced spirits.  Personally, I loved the displays!

The touch of Irish isn’t just found in the restaurant. The newly renovated sleeping rooms also have accents of green. 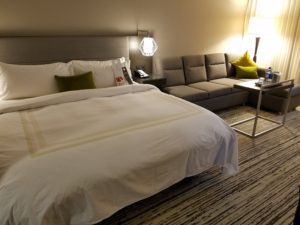 And, if you’re really feeling the luck of the Irish, you might just stumble across this little door. After all, the Columbus Marriott NW is just one stop along the Irish Fairy Door Trail. A little port into the magical world that is Dublin, OH. Good luck! 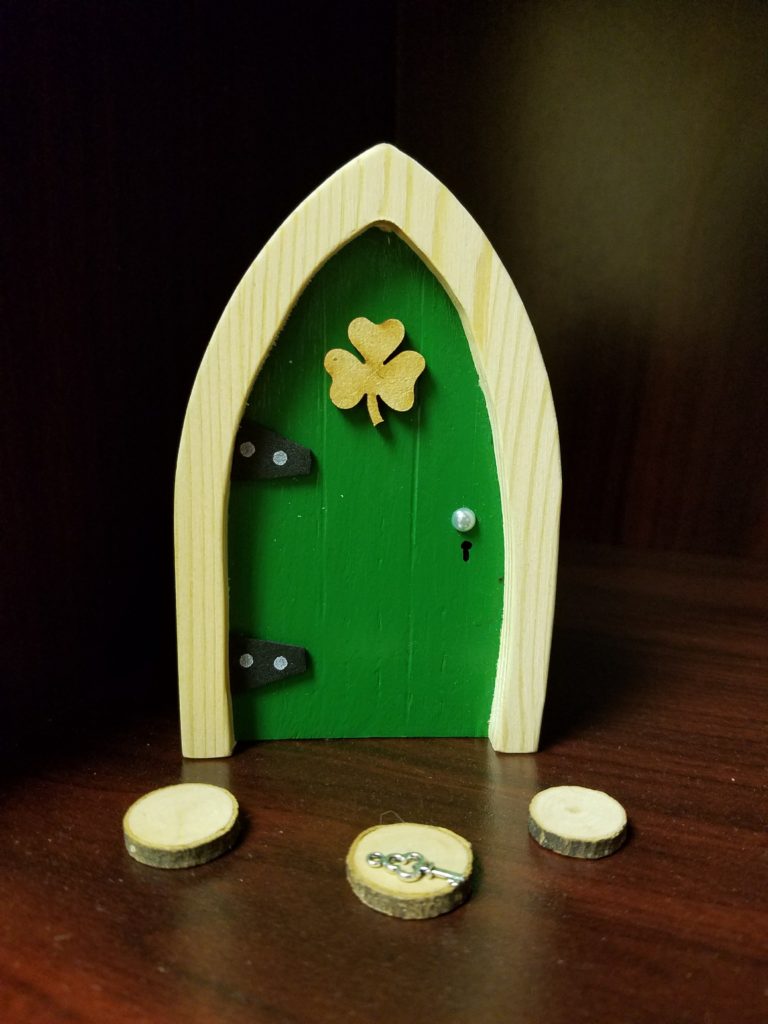