There’s a new kid on the block, literally. The first hotel in the city of Orrville, OH and the first hotel of this new brand in the state.  How cool! For some of us in the “big city,” it’s hard to imagine a town without a hotel. The mayor of Orrville, Dave Handwerk, announced to the crowd on the day of the grand opening that this hotel was the first to be constructed in Orrville in 97 years. Can you imagine? 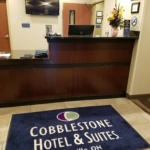 I want to take this opportunity to feature a story written by a former OHLA intern and recently graduate of The Ohio State University, Megan Coddington.  Megan wrote this story leading up to the opening of the property, but since, I’ve been able to gather pictures to introduce the new brand to fellow travelers, hoteliers and other industry professionals. So let’s take a look at Ohio’s first Cobblestone Hotel & Suites.

Orrville is a small town in Ohio, located about 30 miles from Akron. With a population of about 8,500, the town is not ideal for big branded hotels to settle down in. Orrville is home of the J.M. Smucker Company and other local businesses that bring in their fair share of visitors that need a place to stay. The closest motels and hotels are 20 minutes away in Wooster.

Enter Cobblestone Hotel & Suites, an upscale, mid-size hotel brand that broke ground on a facility in Orrville in June 2015 — it’s the very first to be located in Ohio.

Cobblestone Hotel & Suites is no stranger to the Midwest having already opened about 60 hotels in the region. This exciting new addition to Ohio will bring “Big City Quality” while keeping

“Small Town Values.” It offers the same amenities that travelers would expect when staying in big-brand hotels, but meets the needs of small towns that are not near major highways. The average room size is 40 rooms and the hotels offer each guest well-appointed public spaces and guestrooms with attentive, friendly service from our hotel teams. Guests are offered free high-speed Internet, complimentary hot breakfast, convenience stores, fitness centers, business centers and on-site beer and wine bars.

The company takes pride in being a family-run business and that doing things the right way is “part of their DNA.” Orrville’s community response has been nothing but positive.  Everyone is ready to welcome the new brand to their town.

“Business-wise I think it will be great for companies to be able to set visitors up in a very nice facility, only minutes away. It should be a great positive for our local industries,” said Orrville Mayor Dave Handwerk.  Not only will this be a positive for local business but also leisure visitors traveling to Orrville for weddings, family reunions, the newly added Heartland Rail Trailand other events that Orrville has to offer throughout the year.

Other local industries are eager to embrace the anticipated addition to their small town. The President and CEO of the Aultman Orrville Hospital, Marchelle Suppan, explains how the Cobblestone Hotel & Suites will provide a convenient location for hospital recruits and short-term staffing assignees. Suppan not only hopes to be able to utilize the hotel for meetings , but she also hopes to sponsor hospital-related events there.

Orrville isn’t the first city to have their hotel needs met by Cobblestone. Salem, Indiana welcomed the first Cobblestone Hotel & Suites in the state in the fall of 2014. Salem is an hour from Louisville, Kentucky, with a population of about 6,300 and with needs similar to Orrville’s– a convenient quality hotel.

Consistent with its values and quality of service, Cobblestone prides itself in hiring locally and using local products when possible.

Cobblestone Hotel & Suites officially opened in March with a Grand Opening on May 5, 2017.  The completed hotel offers 54 guest rooms, 8 of which are extended stay rooms with kitchenettes.  True to its word, Cobblestone has incorporated many local  products into its hotel.  They offer Smucker’s Jelly products, Smucker’s maple syrup, Smucker’s Uncrustables® and Smith Dairy milk – all produced in Orrville. The bar includes local wines and Great Lakes Brewing Company beer.

Next time you’re traveling through some of America’s great small towns, check and see if a Cobblestone is available. You won’t be disappointed!

TIP: If you were one of the lucky few to receive one of these blue coins during the opening, use it to receive 100 rewards points to your Cobblestone Rewards! 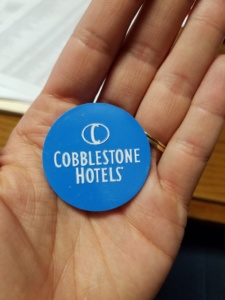