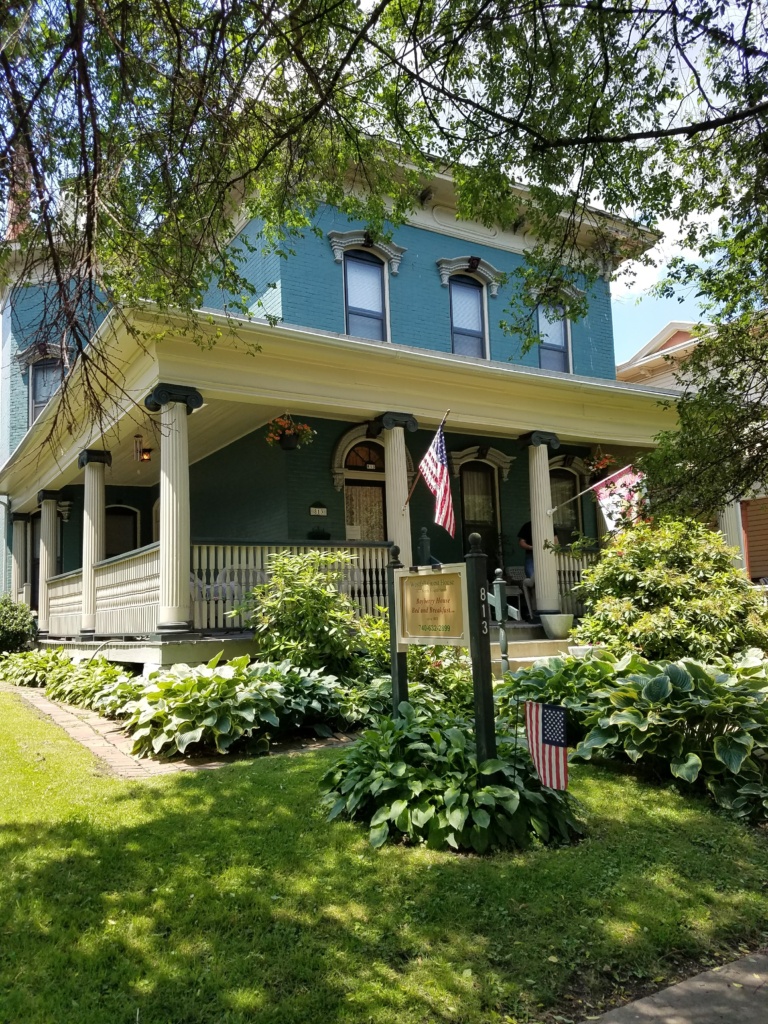 I’ve been routinely traveling to the Ohio Valley since early 2012. “That’s specific!” you might think. It is, but there is a good reason. My sweet husband is from the Ohio Valley, specifically Moundsville, West Virginia (yes, where there is an Indian burial mound in the center of town, conveniently right next to the now-closed penitentiary).  How confusing is that?  This is how people must feel when they arrive at the Cincinnati airport and see Kentucky license plates on the taxis.  Quick geography lesson – The Ohio [RIVER] Valley is roughly made up of most of Ohio, Indiana and Kentucky, but also includes the SW corner of Pennsylvania, the NW corner or panhandle of West Virginia. I don’t know a lot of Columbus residents who consider themselves to live in the Ohio Valley, which is why I think it’s important to note that socially (not geographically) most people referring to the Ohio Valley mean

that junction of eastern Ohio that runs along Pennsylvania and West Virginia or in technical terms the Upper Ohio Valley. Now that we all know where our adventure takes us today, let’s focus in on the remarkable work that owner Scott Dressel is doing in a town nestled very closely to the border of both WV and PA – Steubenville, OH.

I found Scott on a very warm Friday afternoon, awaiting my arrival. He had given me very specific instructions to meet him at 813 N 4th and we can “start there.”  Little did I know, Scott and his son have been restoring old Victorian homes (and much more, including the town theater) in Steubenville for years. For most B&B owners, operating the inn is their full time job.  For Scott, I sense that was an after thought.  Scott is here to restore beauty in some of the old homes that line the North Fourth Street Historic District. 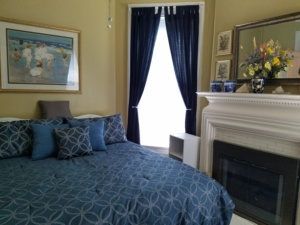 Scott greets me on the massive front porch of the Westfall House, one of two of the beautiful homes that houses Scott’s B&B – Bayberry House B&B. This house has one of my favorite rooms, Myrtle & Ivy’s Room. I don’t know if it’s the colors or the placement of the window and the fireplace, but this room transports me to a palace I feel like I’ve only read about in historic fiction books. 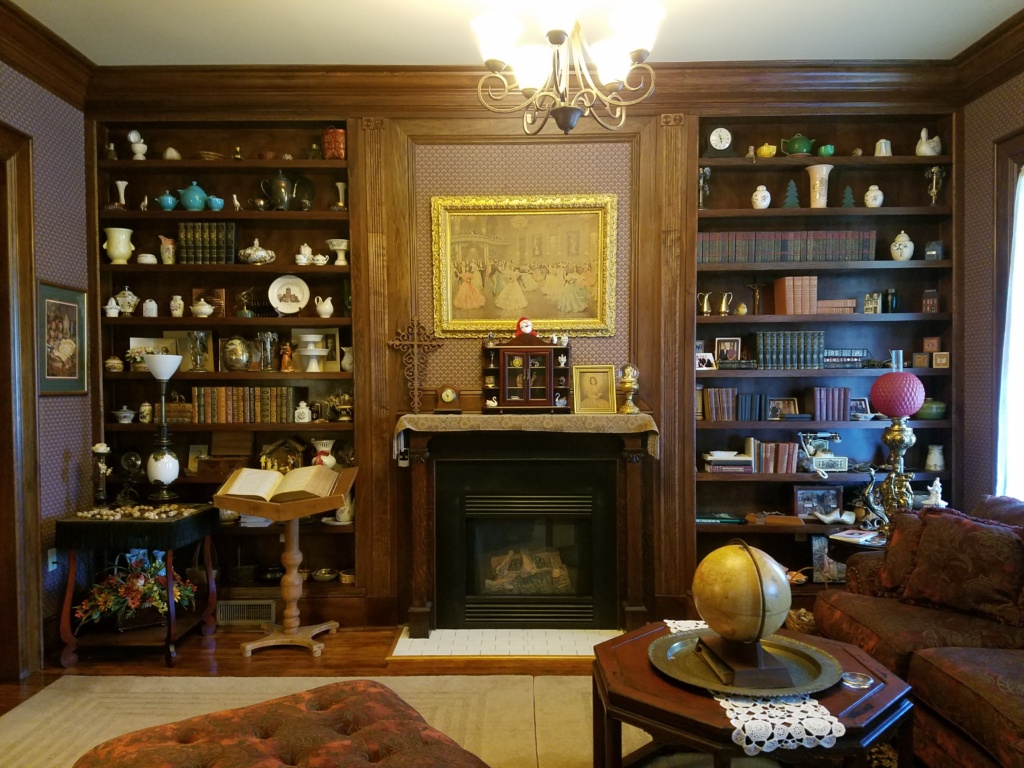 We moved next door to the Garrett House.  This house, just a few doors down from the Westfall House really puts Scott’s restoration skills on display. The sitting area is absolutely draw-dropping.  The wood and meticulous detail is something you quite literally “just don’t see any more.”  One wall is lined with a handsome bookcase housing all kinds of interesting books, trinkets and antiques. My favorite part of this room, was the conversation… sofa? chairs?  I’m not sure exactly what you call it, but I’ve never seen anything like it! I asked Scott what he had to do to restore it and he said that he 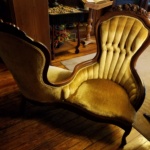 found it just the way it is! Amazing!

One of my favorite parts of the Garrett House was the kitchen. A different vibe from the rest of the house, the kitchen looks like it came straight out of a home design catalog, except the difference here? It’s authentic.  Scott told me that the crew working on the kitchen found the original hearth hidden behind a wall.  The discovery was a bit of a surprise, but Scott used it to his advantage, transforming the kitchen into a masonry-meets-wood, work of art. 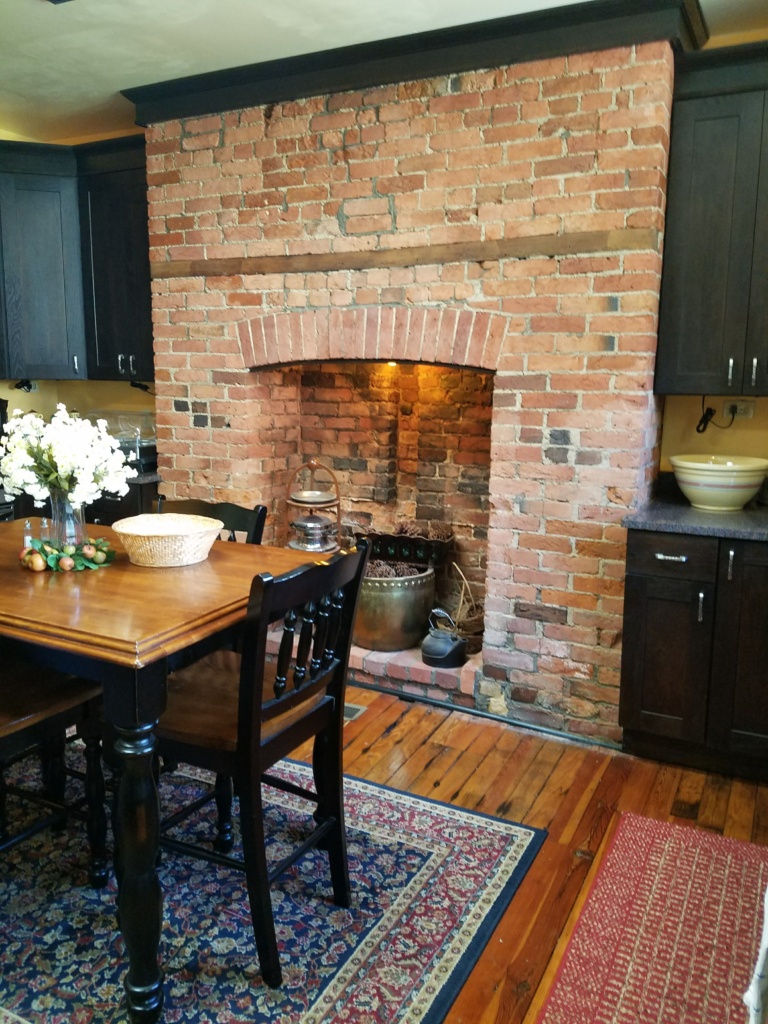 I know that Steubenville isn’t on the main drag or somewhere you find yourself in many times a year, but Scott just might have me convinced it’s worth a special drive. He has convinced others.  He has regular guests that come to visit him often, traveling from across the country.  He even had a guest bring him an antique item to add to the inn because she felt it was “just what he needed.” . After stopping at Scott’s, I ventured down Rt. 7 to St. Clairsville. I was sharing with the front desk team my visit to Scott’s property and a woman there said, “isn’t what he’s doing amazing? He has restored so many places in the Steubenville community!” A friend of ours living in Columbus, but from Weirton, WV commented upon hearing of my visit, “the historic district of Steubenville is beautiful. I hear there’s a guy there that restores some of the old houses.”  For the small town of Steubenville, Scott is creating quite a reputation for it’s old Victorian homes. Next time you’re headed to the Ohio Valley or the Pittsburgh International Airport  stop by and stay a while – I guarantee you will be just as amazed as me.